“If the all Arabs united and marched under Hafez al-Assad unarmed to Israel, they would easily outnumber and overthrow the Israelis, but what hinders them from doing so is that the Arab leaders do not want to unite under the banner of the Baath Party.” This idea was always mentioned within the National Culture classes in the Syrian schools.

Today, sixty years after the birth of Israel, it is quite evident that quantity of population does not stand a bit and means nothing compared to organized discipline. Moreover, propaganda can be easily launched on paper or in educational curricula or even through social media and the internet, yet in the end it remains empty and meaningless unless articulated through an organized work strategy. The Israeli state has indeed become a successful country in the Middle East that has investments throughout the world, whereas The Syrian people have been torn among regions of influence, which divided Syria and turned it from the unified state beneath Hafez al-Assad, to the states beneath the Bashar al-Assad who killed the members of his Sect in a futile war in order to continue his rule under the authority of the Iranians and the Russians.

The Peace Agreement and the Deal of the Century in the Middle East:

The researcher at Hertselia Center for Studies, Ofer Isreli[1], has written an interesting article in the

“Jerusalem Post”[2], which talks about a new Israeli peace initiative for the Arab world. Certainly, this article carries an approach with quite a high expectation on the Israeli side, prior to the announcement of the “Deal of the Century,” which is being prepared by the Trump administration in order to end the Arab-Israeli conflict. The most prominent items of this initiative according to Ofer’s article are the following:

However, if we closely look at the details of the seven items, we notice that all these items serve Israel and the only items that serve the “Saudis and the Emirates” are the fifth and the sixth items. The recent Saudi-Emirati statements have had a strong Arab demand that stresses the need to “end Iranian expansion in the Middle East”, especially after the domination of Iran over Iraq, Syria, and Lebanon, and its incursion into Bahrain and Yemen, in addition to its economic and media cooperation with Qatar, while the rest of the items are not essential for both the United Arab Emirates and Saudi Arabia.

In a close consideration regarding the possibility to achieve each item separately we view the following data:

Who will be the governor of this union? Is it King Abdullah, whose government is experiencing economic disorders, or the military government of Abdel Fattah el-Sisi, which could not eliminate the Islamic State group “ISIS” in Sinai.

Will Hamas movement be subject to the Egyptian army in Sinai? And If so, it means that the movement will end militarily, so will the movement approve the first point?

Despite the difficulty of achieving such a project, the most logical option for this item is that the West Bank government fuses with the government of Jordan, and the fusion of the Gaza government with the Egyptian state, while ensuring the achievement of long-term investment projects within both Egypt and Jordan without addressing the draft of a federal union.

On May 14, 2018, the United States Embassy in Jerusalem was opened where 32 countries from different continents attended the ceremony, namely:

Of course, the symbolism of attending such an event is to promote the idea of “Jerusalem as the capital of Israel”. It is true that many countries in the world rejected this idea, but the Israelis, through the pressure of their active lobbies all around the world, insist to support this idea and increase the number of countries that believe this. On the other hand, the Palestinians are active in aborting this idea, where they try to exploit the religious cause of the city to mobilize the Muslim world with them. The Palestinian liberals, in cooperation with Israeli peace organizations, are also trying to promote the idea of turning Jerusalem into a capital of world heritage, rather than giving it a governmental notion.

Moreover, in light of the Gulf conflicts between Qatar on one side and the Arab Emirates and Saudi Arabia on the other side, the media is active on both sides trying to promote the cause of Jerusalem in order to embarrass any party from recognizing Israel’s right to Jerusalem, so we see a unified letter from all the Arab governments that refuses to turn Jerusalem into the capital of Israel.

As a result, this item will be a problematic issue if it is not accomplished in a comprehensive deal that takes into account the religious specificity of this city in the Islamic world which exceeds 1.6 billion, 23.4 % percent of the world’s population.[3] 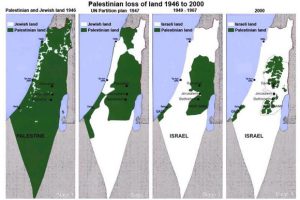 But this proposal could justify achieving another project for the Israelis, one that horrified Palestinians who oppose Israel in 1948, which is “exile”. In other words, the expulsion of Palestinians, who do not believe in the Jewishness of the state, to outside Israel. This is exactly why all the Jewish extremists are going to support this project.

Another aspect of this item shows Israel’s desire to expand its settlements towards the West Bank, in other words, Israel is moving toward expansion over the lands of the Palestinian in the West Bank. Palestinians will never approve or accept Specifically this section of this item and will face a mass public opposition and may overthrow any Palestinian government that accepts to negotiate such an idea, because approving it means the end of the Palestinian dream forever, and the Palestinians, just like the Israelis, are clinging to the idea of the land. This is exactly what justifies the efforts of both the Mahmoud Abbas and Ismail Haniyeh governments to promote Iran, Israel’s adversary, where al-Fateh organization stood out clearly since day one with the Syrian regime. Recently Hamas has also announced that it retreated from its attitude against the Syrian regime, Iran’s partner in northern Israel. Thus, adopting such an attitude, the Palestinian distant themselves from the Saudi-UAE axis and convert towards the Qatari-Iranian axis.

On the Palestinian side, this item will be rejected, But the Palestinians have no other option, especially after the suspension of the US financial aid to the UNRWA, and the growing burden of the Palestinian refugees as their population in the displaced countries grows.

Furthermore, the geo-military presence of the Russians in Syria will not allow massive land incursions. The Russians seek to place Lebanon and Syria under their tutelage. In their meetings with the Israelis, they try to convince them that they seek to stabilize the north of Israel and making it an area that does not threaten Israel’s security.

The Saudis and the Emirates will certainly approve any war against Hezbollah, they may also secretly contribute to financing the expenses of such a war. Hezbollah’s Secretary-General Hassan Nasrallah made it clear in most of his speeches that he supports the Houthis in Yemen, and that The Houthis are the group that boasts of bombing Saudi cities in response to the latter’s intervention in the civil war in Yemen through the Arab Coalition against Legitimacy.

Therefore, there is a natural and mutual interest in the Israeli cooperation with the Arab world in this regard, where the Arab states are militarily in a weak state in the face of Iranian expansion. Besides, they need Israeli military force to deter the expansion of Iran’s Revolutionary Guard. In turn, Israel will not be able to end Iranian influence in the Middle East through air strikes in Syria and Lebanon, since the Iranian influence is not only military, but also economic, commercial, and cultural. There is therefore a need for cooperation with the Arab world to address the intellectual project of the mandate of the Faqih.

It is likely that the Israelis will not approve or accept any agreement unless the Syrian government announces a formal declaration of its commitment to achieve a comprehensive peace with the Israelis and to ensure that it ceases its cooperation with the Iranians and Hezbollah, as well as to help them liquidize Hezbollah leaders considering it a terrorist organization. But the Syrian regime is unable to commit to such a matter since the leaders of the Iranian Revolutionary Guard are the ones who manage and run ground battles in Syria, and Most of the militias that precede ground attacks by the Syrian army are Shiite militias financed by Iran.

Heading out of this quick presentation of the seven items combined, we see detachment and a breakaway from the reality in the Middle East, and perhaps the only option for achieving peace between the Arabs and the Israelis is through prioritizing some items at the expense of others, as follows:

This item will not be realized overnight, because all China, Russia, and India will oppose the idea of a war on Iran. So Saudi Arabia should provide guarantees to China and India that it would provide a substitute for Iran’s oil in case of a war. The Israelis must also persuade Moscow that they will continue to invest in Iran and Syria for a long time if they abandon the Mullah’s government. Of course, the war against Iran will not be launched by Israel alone, rather there will be a huge crown, as what happened in Iraq in 2003. The pretext for this war is to protect the Strait of Hormuz from Iranian threats, as well as other issues related to Iran’s support for al Qaeda. Certainly, the elimination of the mullahs’ regime or weakening it highly in Tehran means a gradual disintegration of the influence of the Shiite religious parties in Iraq until Sunni influence in Iraq is comparable.

Hezbollah’s military wing will also gradually become a political party in Lebanon. But to succeed, it is necessary to bring about a change of government in Syria that topples the Assad family from power and makes significant changes in the security services associated with the Iranian Revolutionary Guard

It is also possible to achieve a series of water investment projects in southern Syria for the purpose of generating electricity and water purification. The human resource for this project is provided by the Syrians whereas the administration, by the Israelis. Certainly, these projects will positively affect the entire Jordan River basin and the Dead Sea and will increase the opportunities for agricultural investment and tourism that will, in turn, benefit the Palestinians of the West Bank.

The history of peace projects between Arab governments and Israel has never been publically successful. Today, the Egyptian and Jordanian people look in hostility at the Israelis. In addition, boycotts of Israeli goods are still being promoted by Arab nationalist parties. Therefore, the Arab-Israeli peace process should not be carried out by the dictatorial Arab governments, as happened at Camp David in 1978. On the contrary, It must be carried out either through Arab democratic governments or through current governments, showing a real and genuine interest in achieving this peace.

[3] The Future of the Global Muslim Population, Pew Research Center.